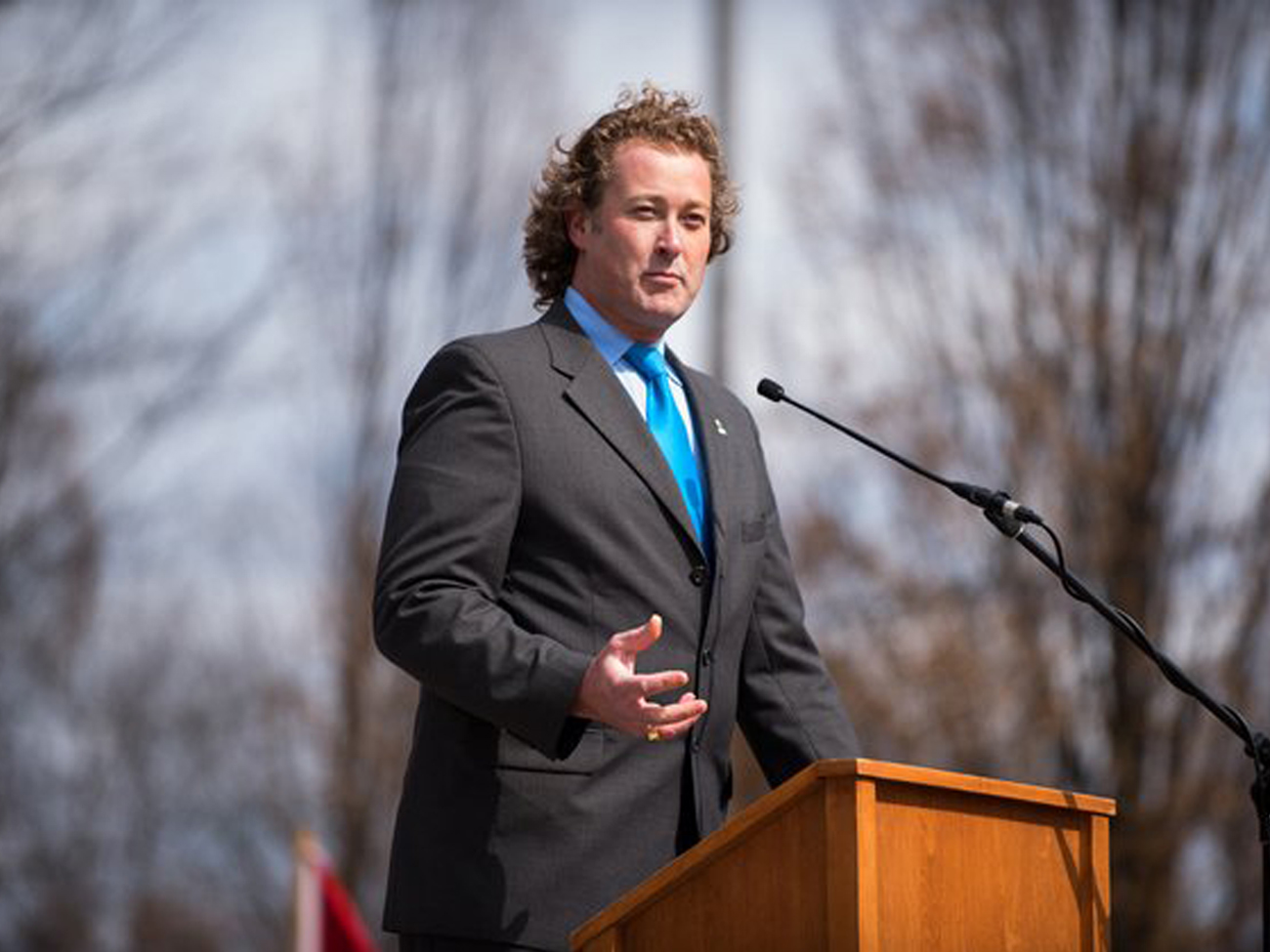 From Math to Mayor

The mayor of Woodstock, Ontario isn’t called the “Coolest Mayor East of the Rockies” for nothing. Elected in 2014 by a sizable margin, Mayor Trevor Birtch is a champion of inclusivity and sustainability. He puts long-term benefits for his community over short-term cost-savings for a few, and genuinely wants to leave he world in better shape than he found it.

“We’re doing long-term strategies that incorporate all aspects to improve people’s quality of life” Birtch says of his mission.

Although the role seems to fit Birtch like a glove, mayorship wasn’t always a path he thought to take. In fact, if it weren’t for a simple act of compassion he received in high school, the moniker “Coolest Mayor East of the Rockies” may have gone unearned

To break into the business world, Birtch knew he needed good grades so he could be accepted into a top university. He was a hard worker, always studious, and at first, his diligence paid off. The future mayor was excelling in nearly every subject, including math, which he had been good at all his life. But during year 11, he began struggling with the material. He studied harder, but the concepts in his text book still eluded him. He didn’t know what he was doing wrong. Nothing was working.

“I just couldn't understand,” Birtch said. “I was failing, and it was holding me back from my dreams of going to university.”

And then one day, Birtch was working his after school job when a retired school superintendent stopped in. They struck up a conversation, wherein Birtch explained how he had hit a wall in math, and was afraid he’d fail. So the superintendent asked to see his math book. After giving it a quick once-over, he wrote down five math questions and handed them to the student, who answered them as best he could. The superintendent reviewed the answers and began grading them. Wrong. Wrong. Wrong. Wrong. Right.

“He said, ‘Now I know how your mind works,” Birtch recalls. “That was the same question five different ways.” With new insight into Birtch’s mind, the superintendent wrote some notes for the student’s math teacher, who began working with him each day before school started. Soon, concepts became clearer, his grades rose, and he ended up passing all three required math courses. He was even able to graduate one year early.

None of this, Birtch recounts, would have happened if someone hadn’t taken the time to speak some hope and encouragement, and understand how his mind worked.

“I remember after graduating university, talking to that individual, and I told him he altered my life forever by helping me with math, and at that point he said he didn’t even remember doing that. Every day he always wanted to give encouragement to at least one individual ... so I was just one of those people.”

“None of this would have happened if someone hadn’t taken the time to speak some hope and encouragement.”

Prior to the superintendent’s intervention, Birtch had planned on entering the business world. But he now realized he would rather seek a leadership role where he could help as many people as possible. With that in mind, he enrolled in University of Western Ontario and studied Politics and Business. After graduating, he went into the financial services sector, where he eventually found himself calculating utility rates for the mayor. This gave him a peek into the inner workings of local government.

“I saw when government introduced new programs, if it was something like childcare, it would be implemented locally,” Birtch said. “That’s when I decided I needed to work helping provide the analysis data and numbers to the decision makers locally.”

So Birtch started working as a financial analyst for the County of Oxford. During this time, he broadened his education, earning, among other things, a Certified Municipal Officer designation. From AMCTO.

It was 11 years into the job when Birtch’s wife had a revelation. “She said, all these different things you’ve done, all of these different certificates, degrees, diplomas you’ve got, you’re meant to be the mayor.” She was right. After a hard fought campaign against two former mayors with money at their disposal, Birtch was elected mayor of Woodstock. Now, he’s not only able to draw on his local government expertise to effectively lead a bureaucracy, he gets to act as the cheerleader of the community.

“When they see me, I’m trying to figure out each one’s uniqueness and encourage them, help them to persevere in the things that are perceived as obstacles for them. I try to get them to look at it differently. Just like math.”

The mayor has the opportunity to head public functions, serve as the spokesperson for his town during national conferences, and shine a spotlight on local issues in need of attention. For instance, last year, Birtch helped start an open dialogue about self-harm and suicide by speaking with local agencies, youth groups, and church groups. His influence as mayor certainly helped him bring people together over the issue, but there’s more to it: Birtch is able to quickly gain the trust of the town’s youth.

Birtch’s encounter with the superintendent did more than illuminate the path which would eventually lead him to the mayorship, it helped him succeed as mayor.

Just like one math question can be written and understood in five different ways, every town is made up of individuals with contrasting perspectives and experiences. So Birtch tries connecting with his constituents on a personal level while remaining open-minded and thoughtful. In a way, he has taken up the mantle of superintendent.